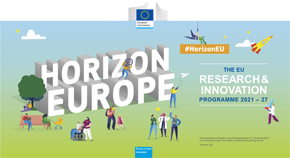 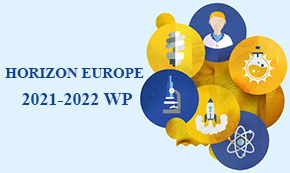 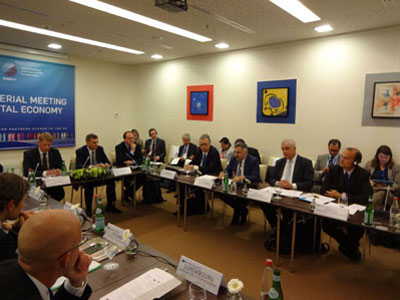 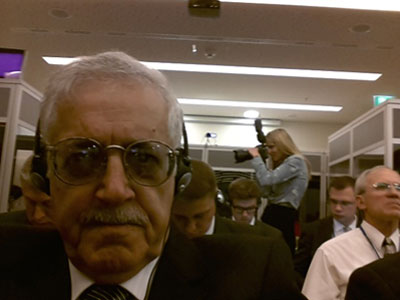 On 11 June 2015 the Latvian Presidency of the Council of the European Union in close cooperation with the Commission organized in Luxembourg the first Eastern Partnership Ministerial Meeting on Digital Economy. The meeting was co-chaired by the Minister of Transport of Latvia Mr Anrijs Matīss, and Commission’s Vice President Andrus Ansip.
EU Ministers responsible for the Digital Economy and their representatives met their Armenian, Azerbaijani, Belarus, Georgian, Moldovan and Ukrainian counterparts in the afternoon of 11 June to discuss the challenges and opportunities of the digital economy of the Eastern Partnership. The meeting was organised by the Latvian Presidency of the Council of the European Union and the European Commission. Azerbaijan was represented by a delegation that included Elmir Velizadeh, Deputy Minister of Communications and High Technologies, Isbendiyar Aliyev, Head of Information Society Development Department at the Ministry of Communications and High Technologies, Rasim Aliguliyev, Member of the Azerbaijan National Academy of Sciences, Director of the Institute of Information Technology, and Tofig Babayev, Director of R.I.T.A. Deputy Minister made a speech on the current state of the digital market in Azerbaijan.
Representatives of European Financial Institutions, the network of Eastern Partnership regulators for electronic communications (EaPeReg), the Body of European Regulators for Electronic Communications (BEREC), as well as representatives of ICT (Information and Communication Technologies) industry and civil society were also present.

EaPConnect
At the meeting, the European Commission signed a €13 million contract to expand connectivity in the Eastern Partnership countries. The project will create a regional high-speed Internet network dedicated to research and education (R&E) across Armenia, Azerbaijan, Belarus, Georgia, Moldova and Ukraine. It will interconnect the National Research and Education Networks (NRENs) in the EaP partner countries and integrate them in the pan-European GÉANT network and enable researchers and students in the European Union’s Eastern Neighbourhood, to fully participate in the digital economy. Two million scientists, academics and students at over 700 institutions across the region are expected to benefit from this connectivity boost.